I only realized just now that I said the HOD kept on pushing us but actually it is not the HOD. This person I was talking about actually is my unit head. He's in charge of the unit and pretty awesome at that too. He was the HOD for a couple of years but if one post is being held too long by someone, it will do no good. You can see the state of Malaysia now. Drama y'all. Barulah syok kau ada rival-rival. Semua orang nak buat kerja sungguh-sungguh. Layan orang bawahan dengan baik. Kasik itu ini nak menangkan hati orang bawahan. If there's no opposition team, the world will be dull, I tell you. Same like if you have a friend that nod and yes-sing to every word that you said. Kan kan? Just say yes will ya? HAHA.

I was being asked earlier today whether Babi or Syaitan is much worse?

Due to my lacking of reactivity? or reaction? in giving proper answer, and I wonder how did I answer all those POIs before.., I choose Syaitan to be the worst though I told my friend it is just the same.

You see, Babi is just a dirty animal. Babi sounds so not nice but a pig sounds otherwise. When you hear someone is calling names of other people, Babi will sound so horrendous and not pretty at all. The emotion of saying pig and babi is different too. Try, you pig! is nothing more than just calling someone who ate like a pig. At least that is what I imagined all this while.

He's a pig. Babilah dia. Contoh ok. Haha rasa macam zaman sekolah rendah. I din know why we were so allergic to the word to the point if we want to say it, "contohlah kan.." must be inserted. What I want to say is, Babi or pig is just an animal. A dirty one. Maybe that is why people will be offended if you are comparing him to an animal.

Erm.. I am not encouraging anyone to "membabikan" those who made you angry but it is just too funny. Piglet is cute by the way. My parents don't like me cursing others. I am a good daughter so I obey them. HAHAHAHAHA.shadap. What I am doing now,my friends.. is what we call angkat bakul sendiri.


Syaitan on the other hand was and still a pure evil. Who can challenge that,eh? 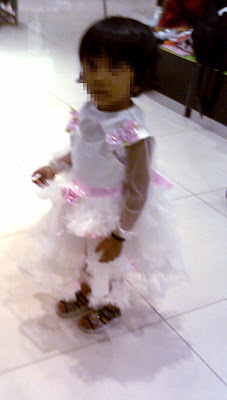 A girl in her outfit to the shopping mall. Why Mummy never dressed me like this before?
I learnt a new word. Daghak? Any Kelantanese to clarify this?
p/s: why so serious?
Babbled Nawa at 4:24:00 pm