Spa Q ends today will be my bimbo tajuk. HAHA

Salaam Alaik
Gaaah..
Leaning new languages is so much FUN FUN FUN!!!!
but I have problem with my pronunciation. and I am telling you, I am twirling my tongue as best as I can. but no, i won't be jumping  in class. Though I love jumping but seriosly no thank you.
Miahahahahahahah...
Off off i go.
updates*: omigod.. I hate the ending of spa q. Sah ada spa q 3 pulak! haish....
Babbled Nawa at 2:51:00 pm

Sebab ada orang tak bagi guna. Bila cakap nanti dia pandang membunuh. Dululah. Sekarang tak tahu.
Anyhow,
Salaam Alaik
And here I am again posting.
I am off to the college again to join this 3-month-course of learning Kannada languange and a few others. Katanya lah.
But honestly, I am very excited to learn these languages, of course lah kan. Any new languange to learn, you will be very excited about it. Some more this one is closely related to Bollywood.
Harap sangat belajar Hindi. Boleh menari-nari tengok hindustan pusing-pusing pastu nyanyi sekali dengan lebih faham dan penuh penghayatan sambil hentak-hentak kaki, maka harus memakai gelang kaki lah begitu tetapi hanya dalam bilik sendiri. Ingat! dalam bilik sendiri!. Oh well, to do this kind of thing out in the public will affect some people tremendously. So, I have to behave.. to behave(echo).. hence in my own room, I will go banana!
Lagipun, haram weh perempuan menari-nari in public. Astaghfirullah. Insaf kembali setelah google menari-nari hentakkan kaki ini pula yang dapat. BACA.INI ILMU!
Babbling is good. I like to give good babbling yet I do not know if anyone will read this. If you do, then a hug for you. 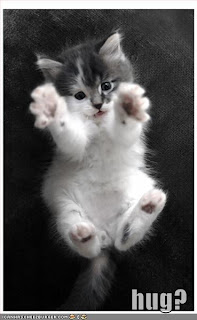 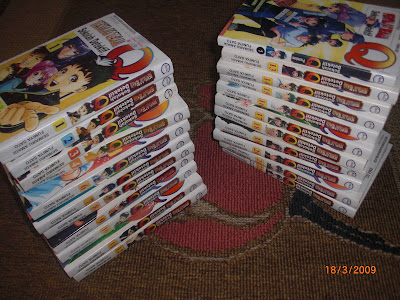 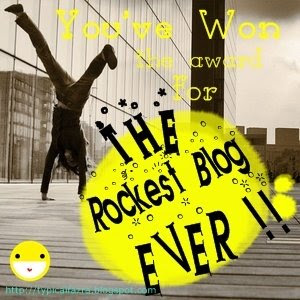 To Hawaii we go!

I do not know about you but I really like this song. It was so relaxing like being in Hawaii or something. If you are listening to it, I guess you know the song is very similar to our Negaraku.

To me, it does not matter from where Negaraku came from. There are many other countries that took the melody of a certain song from different country. Even America's national anthem was from a British drinking song! So what is the fuss?

The PPSMI thing is too much.This side said YES YES YES. The other said NO NO NO.

Why can't they just let the other side say what ever they want? They are just sending a memorandum for god's sake.

So what is this big fuss saying demostrasi is not good and so forth? Depicting citizen of Malaysia as unmannered and uncivilised? Come on lah! How come you could be so shallow by thinking that?

Demonstrating is justa part of expressing your thoughts. How wrong could that be? Just because the people are against something and have no medium to express themselves , why not? Since the newspaper is biased to one side, their paper got banned, the TV is too revolting to watch , then the internet you want to have a censorship board bla bla.. Say one word against me, you'll be arrested. Ceh.

I knew some people that was a part of this demo-demo thingy. He/She (I guess I can not say the name because even in the internet we are not safe anymore. Heh ) said that it went peacefully and suddenly, BAM! tear gas all over them. What the heck? What could A. Samad Said an old man do to have that?

You know, it is just the same like Ketuanan Melayu, derhaka pada raja and so on. You talked so much about it and blamed others that you did not realise that you've done it also. Macam kes Terengganu tu lah kan. Tak ada pula orang nak bangkitkan hal ni ek? Mereka pun berdemonstrasi juga tapi dipertahankan? Let alone those who are against the Sultan at that time are the Malays, maybe these people are the one who now trying so hard to protect the Ketuanan Melayu and Hormat pada Raja and so forth. Orang sendiri buat takpe. Orang lain buat tak boleh. 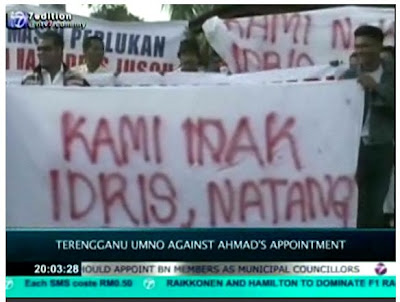 Bangga eh orang yang pegang banner ni. Siap senyum-senyum lagi. Agak-agak kena charge tak?
I am so fed up with Malaysia right now. I am sick of the upperclass people or so they called themselves who never think of the people below them. Just because you have money and title, you think you can do whatever you want. Where do you get your money eh? Hidup macam roda dan roda itu bulat. Maybe you'll be like us or even lower than us. You never know the prayer of those you treated badly, can you? I truly hate this bunch of people. Not just because . I have my other reason too but it is too personal to share.

I woke up at 12pm today. Yeah, anak dara tak elok bangun lambat.. peepot peepot and so on but I slept at 4 or 5am just now. Then woke up again to pray at 6 or so. So what else to do when your head was buzzing like mad due to not having enough sleep?

Well, I was discovering Ebay last night. It was like a new dimension yet to be discovered by me back then. I was very Jakun, you see. I know I was a bit em.. what we say ketinggalan zaman eh?Oh, outdated!

Now I am back again to explore the wonderworld of ebay. Ebay Malaysia entah apa-apa. Tak ada benda menarik. So Ebay Aussie lah macam menarik. Lagipun I have 50aud shopping voucher from Miss Nagela Loson. All the same, if not enough I can ask for someone nice, good-looking, charming, smart, pretty, handsome, cute, kind-hearted, down to earth, pleasant and all good things put up together, to top up a few dollars for me.

So, are you fit to be the one?

Septimus Heap is my in-thing right now. I think I like him better than Harry because I imagined Sep to be very handsome. Well, he is blonde and never been in a movie before. I said it before that I do not like it when the characters of a book are in movies because their images will be stuck forever as the faces of the actors. Not fun, I tell you.

officially in the record of the government of Malaysia, I am 19.

I was afraid to admit it but yes, it was not that long ago he did that. It was as if it was just like yesterday.

Reminiscing the old days sometimes caught me up in I don't know, sad, longing to be there again kind of feeling, you know. Seeing the smaller younger you, your friends, your parents, your sisters and brother. Those kind of memories were sweet yet they were so far away and I sincerely hoped to be in them again.

being in the kindergarten back again and quarrel with the boys and got very irritated with my sister for taunting me with some other boy. (Why do I ever hated it as the boy was a cute one but I don't know if he still is. Maybe he got pimples all over his face and not looking any more near cute right now. Who knows?)

having all my siblings together,singing songs inside the car, doing house chores according to the duty roster, arguing who should be doing this and that, watching TV together and commenting on each and everything there is on TV, sleeping together in one room and chat until morning

get the chance to surf the net by paying RM3.50 (if I am not mistakern) per hour to my father (dang, we were cheated by our own father!LOL), having dinner out on birthdays with the entire family, scolded by Mum for quarelling with each other where yelling and occasional cursing took place ( but I still have it because I am still arguing with my 8-year-old brother minus the cursing of course.)

beaten up by my mother with a hanger and getting locked up inside a bathrooom by my father?

So not missing those two but then again they were fond memories to look back.

I sound like an old woman. But then again, everyone will always have once in a life time being a nineteen year old.

And so, I shall enjoy it.

Hey Nawa, have a blast year of being nineteen!

Thank you, all!
This is the smaller me. 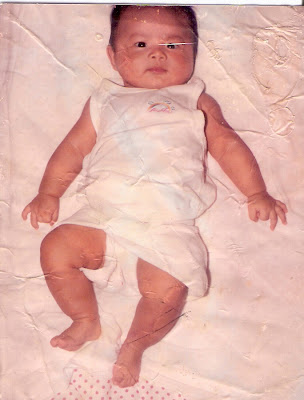