I was posted to a new department this week from OBG to General Medicine. Luckily ( I hope ), I was posted into 4th Unit in which I heard good stories of no screaming PGs or evil unit head but, you'll never know as it has only been 2 days. So far I can say, everything's good.

Today was OPD day. There will be like many sick patients coming into the department to be diagnosed and get admitted into wards. Nothing unusual happened. But one thing that really caught my attention was when one police officer came in. He was coming along with two elderly people who I guessed were his parents. His mother was being checked exclusively by the head unit, pushing behind all those that came in before her. Well that was nothing maybe but what amazed me was the police officer got to sit at the table together with the doctors. Mind you, this is a very crowded place.

Those who accompanied the patients to see the doctor will never get to sit because I repeat, it's a very crowded room. But this guy, with his uniform, Daewoo walkie-talkie and one big confident moustache sat nonchalantly next to one of the PGs and begin talking to the unit head. The next thing that made me shaking my head silently was he yelled to another patient for trying to see the doctor before his father did. It was unsettling because his father was hiding far behind where no one could see him and others were queuing for a long time. Maybe that atuk penat kot. His BP was 190/110mmHg by the way. Tapi tak perlu jerit-jerit. Kecut perut pakcik diabetic sejak umur 13 tahun, yang sekarang heading to renal failure tu tadi. Kesian dia.

The power of uniform, ey?

It reminded me with one news in Malaysia. There was this boy who wrote a letter to the camp where he was being assigned to for the NS/PLKN stating that he was the foster child of one of the sultan. The hilarious part was, the boy was welcomed extravagantly by the camp administrator and all. When later they found out the truth, it was like a huuuuuuuuuuuuuuuuuuuuuge embarrassment and tried to blame the boy etc etc. Dah malu nak pinpoint kat orang lain. SOY lah! SOY!

What I am trying to say is, double standard ada di mana-mana. 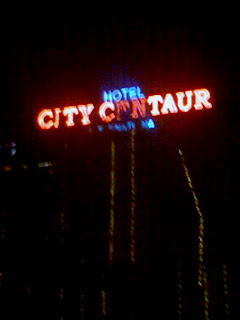 Bangalore has a city centaur yo.