This is for Akak who misses me.

India was sure funny. It is amazing to know that you will get only 10 days off after one year attending college and also when somebody famous dies, you will immediately get one day holiday. I know it is bad rejoicing to the fact that someone dies but it is hard not to, as we will get a holiday and that is like our source of joy. Being able to spend a day at home doing nothing with uninterrupted sleep,aside from Sunday of course, is a pure bliss.

Today was one of those days but we woke up as usual and went to the class alright early in the morning but by the time all of  us ready to board the bus and off to the hospital for postings ( I am posted in Surgery 4th Unit where all the ulcers seem to dominate but the teachers are nice tho ), the bus drivers refused to take us.

Because apparently there were two wild elephants on rampage in Mysore. They passed by my college I think. Sure there would be lot of fun seeing the elephants stamping on the uni's property but sadly that did not happen. The saddest thing about this was one person was killed.


You don't have to understand the swirly-whirly words to know what's going on actually.


BANGALORE - TWO wild elephants trampled one person to death in a three-hour rampage in the southern Indian city of Mysore early on Wednesday, causing widespread panic, local officials said.
A spokesman said the jumbos entered the city from a nearby forest at about 6am and 'wreaked havoc in a suburb by trampling one person to death and caused panic across the city.'
The victim was a 55-year-old man who had come out of his house in the Bamboo Bazaar area of Mysore on hearing a commotion. He was trampled to death and died instantly.
One elephant barged into a women's college compound and roamed menacingly in the grounds, while the other got into a residential area.
The spokesman said schools and colleges have been closed for the day and extra police deployed as a precaution, even though forest rangers and officials from Mysore zoo managed to capture the animals and tranquilise them.
State forest department officials said the young jumbos came from a forest about 35km away with two others, who remain at large on the outskirts of the city, which is 140km from the tech hub of Bangalore. -- AFP
What I don't understand is, you already knew that these wild elephants are agitated, angry probably even scared but a lot of those who were watching keep on yelling screaming and throwing pebbles at the elephants. You don't have to be a "wild" elephant to be angry to such treatment. It's a simple logic actually.
I laughed at first when they said they are cancelling the day due to elephants roaming around in the city but well it seemed to be one pretty serious thing after all. People, elephants on the road is a normal thing in Mysore but wild elephants on the loose killing people and cows is not. 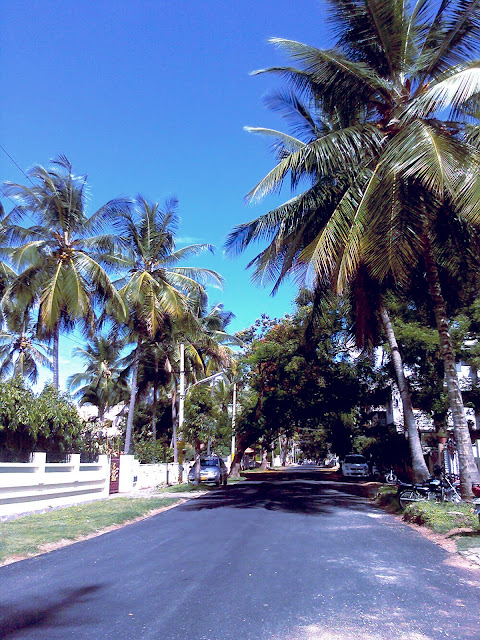 It's a beautiful day today.
p/s : No Ayu, short posts are for lazy people like me. Adding a larger picture made it looked like I wrote longer. Hoho.
Babbled Nawa at 4:43:00 pm