Anyway this month I was having way too much wedding invitations and birth announcements. Not really shocking or anything. I know that I have reached "that age" but I'm just annoyed because I have passed up way tooo many chances and occasions to be with my friends. One of them already gave birth to a second child. Blergh.

Well, I think I need to update more often but because life here is too dull, there is nothing much I can say. I do update occasionally on Tumblr though but my sister said reblogging moving pictures does not consider as blogging. Whatever ok. Apart from going back home for Eid, in which I did not plan AT ALL.. seriously, I have already prepared myself mentally for celebrating Eid here.. but my family did not believe me and insisted that I will somehow in the eve of Raya will miraculously be on the flight home.I guess their prayers were answered. Thank you so much JSS for the 5 day holidays. We performed eid prayers in KLIA like some expats who didn't have any kampung to go back to.Then we headed to KL. My nenek stays in KL. So much for balik kampung. And I gobbled up so many food. Yeah, home is a happy place. Good food, good company, good atmosphere.

I am done with internals and recently my surgery end posting exam. My unit teachers are all darlings. I mean only two of them but enough to compensate the other two very very much. Coincidentally their names literally mean honey. *cough*cough* But I am just glad another posting is coming. God, how to stand 3 months + in the same posting? Surgery was OK but for now, I think I have enough of ulcers, varicose veins and hernia to look forward to. Somehow I am dreading to enter my final term as a final year student. Miserable ok bila cikgu tanya tak boleh jawab pura-pura pandang siling, pandang lantai. HAHAH

Rupee has gone down again. Time for shopping. Weeeee 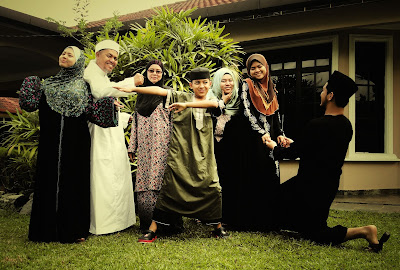 obligatory family free style shot without baju raya tho and too masam since the day was hot and dad insisted on having a garden view. few greens here and there is considered as garden in dad's dictionary.
Babbled Nawa at 5:16:00 pm